How I Got Started

I started Butterfly gardening many years ago. My yard has been a progression over the years, and has made many transformations. Twenty years ago I experienced Hurricane Andrew. My yard and house were destroyed. We decided not to replace the pool screening and open up the backyard and put in some landscaping. That was the official beginning of my love for gardening in South Florida. I added a beautiful water garden years ago, and have been adding host and larvae plants for pollinators, mostly for the butterfly, for as many years as I can remember. I had my yard certified as a Natural Habitat, through the National Wildlife Foundation. To have a natural habitat you need to provide and meet certain requirements: 1. Provide a food source, 2. Provide a water source, 3. Cover, 4. A place to raise young. I try not to use any pesticides in my yard. I vermicompost and recycle as many of my food scraps as possible. If I had more land I would have a huge compost bin to recycle all my yard cuttings. Basically, I try to lessen my carbon footprint on this earth. In my own little world or backyard I try to provide an ecosystem in my water garden, provide birdbaths, birdfeeders, hummingbird nectar sources, feeders, puddling areas, host plants and nectar plants for butterflies and other pollinators. I am hoping to raise everyone’s awareness of the importance of saving our Butterflies, Blooms & Bees. Without them our world and food source will be in trouble. I hope you all enjoy my journey. I am not a Master Gardener, or Master Beekeeper, an Entomologist, or Journalists. I am simply a Backyard Gardener who is trying to lessen her Carbon Footprint of this Earth.

I hope you enjoy my blogs.

I left the hive alone until today, after installing the new queen. What I found was not good. The beautiful divide that I made last week was completely infested with Small Hive Beetle Larvae. I was so disappointed to find this. The new Italian Queen was still in her cage not released, but alive. Her attendants were all dead. I completely destroyed all the bars throwing them into the trash, as there were very few bees left. Inside the hive there were dead bees, larvae, wax, and hundreds of small hive beetle larvae. I can only think of two scenarios to explain what happened. First with the queen not being released the hive was too weak to protect and defend itself from the small hive beetles. Or second, it looks like the population of bees was affected somehow, maybe by robbing, which is maybe why the queen wasn’t released. That may have weakened the hive allowing it to succumb to the small hive beetles. Either way the results are the same. I feel badly for all the bees that died, I feel badly that a beautiful divide failed.

I cleaned out the hive box with water and a scrub brush and a little Clorox Clean Up, got all the larvae and scum out of the hive and preceded to make another mix origin divide. Thank you Les for teaching me this during your class in Albuquerque it has come in very handy. I was able to take 12 bars of honey, nectar, and various stages of brood and make another divide. We cleaned out the Queen Cage of her dead attendants and punctured the candy in the queen cage so the bees could eat through properly.

All looked well! Let’s hope this goes a lot better. I will check the hive Sunday to make sure the queen is released properly. If not I will release her myself. By Sunday it will give the bees enough time to adjust to the new pheromones. I will also brush a few nurse bees into the hive if I think I need to boost the population.

Here is a really cool picture from the hives today, some new honeycomb with bees festooning. It is so cool to watch their behavior. Now if they would just behave so they don’t stress me out so…. I need to breathe! 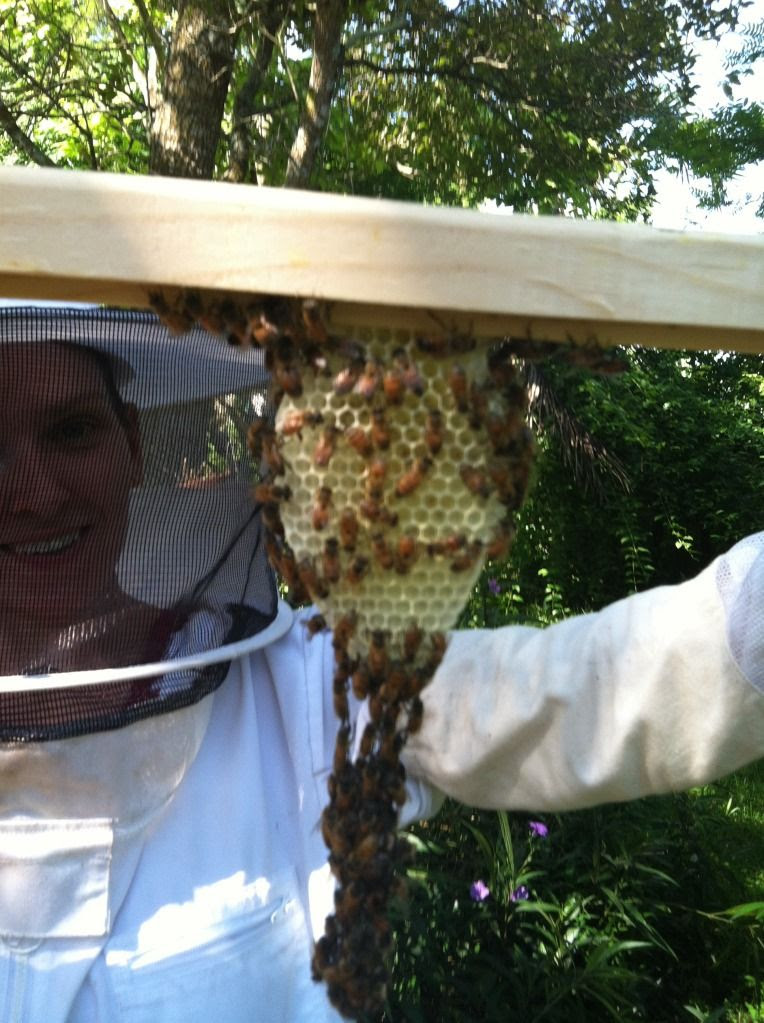 Posted by Maureen Russell at 5:56 AM No comments:

I am exhausted as I have been moving my youngest son Drew into his new apartment for his second year of college. The weather in Boston was beautiful in the 60's during the night and high 70's and low 80's during the day. As usual being up north brought back so many memories of gardening as a youngster. Many flowering annuals were in bloom at this time of the year. I walked from the Copley Marriott towards my son’s apartment, which was about a twenty minute walk. As I passed through the beautiful Christian Science Center, there were some lovely gardens around the reflection pond filed with different lavenders, and echinchias . The Lavender flowers smelled delicious and were full of bees. It was very peaceful to walk through these gardens and pond. It would be a lovely place to sit and meditate on a beautiful fall day. I took some pictures of some local gardens as I walked through the streets of Boston. Somehow they just call to me and I am unable to pass them by without stopping and taking time to smell the roses as the saying goes, and a few pictures. Right outside my son’s apartment is a beautiful Rose of Sharon bush. The bees were numerous and enjoying the nectar that the tree provided. I am exhausted from moving my son into his apartment. We are not use to stairs in Miami and his apartment was on the 4th floor. My calves were so sore I could hardly walk for a couple of days. Even though I was exhausted and broke financially, I got my son settled into his apartment, and got to enjoy the northeast for a few days. Here are some pictures of my trip.

Posted by Maureen Russell at 5:43 AM No comments:

Maureen Russell
Miami, Florida, United States
I am a small Backyard Gardener in Miami Florida. I have lived here since 1984. I grew up in the Northeast a daughter of a farmer from Indiana. I guess I got my love of gardening from my dad. My earliest memories of gardening were a flower bed made of pansies. To this day they remain one of my favorite flowers. We always had some land to raise crops and learned at an early age the love of gardening.

Our butterflies, and bees and other pollinators are in crisis. Without our pollinators our food sources and supplies are in jeopardy. Albert Einstein once said that if the bees disappeared “man would have only four years of life left.” If we don’t look after our pollinators eventually of food could vanish.

Scientists are speculating as to the cause of Colony Collapse Disorder. I am sure you are all aware that our bees have been in trouble for many years. Many feel there is a link between pesticides and CCD. There are many articles, news reports, and movies to increase our awareness of the dangers to our pollinators. Two movies that are available to view are “Vanishing of the Bees” and “Queen of the Sun”. Both are great movies and really make you stop and think that we as a global society need to protect our pollinators.

I recently became a Backyard Beekeeper. It was the next progression in my quest to help our pollinators. I decided to take a non traditional approach to beekeeping and have Top Bar Hives (TBH). They have been used in third world countries because they are relatively inexpensive to build. They are a horizontal box with bars that the bees draw out their own comb. This has been difficult because most beekeepers use the traditional Langstroth hives. Managing a TBH as a new beekeepers has been quite a learning experience. Most traditional beekeepers raise their bees on artificial foundation, feed sugar water, and use pesticides to control the Varroa mite that is destroying our bees.

Most traditional beekeepers use large cell (LC) foundation which is approximately 5.4mm instead of a more natural size comb of 4.9mm. The larger the comb the more honey they produce. Over the years this is stressing our bees and making them larger and larger and more susceptible to parasites such as the Varroa mite. My bees are raised in my backyard and neighborhood and are able to forage on a diverse plant variety, instead of many bees that are given just one monoculture i.e. pollination of the almond trees in California. I don’t use any pesticides, fungicides, and raise my bees as organically as possible.